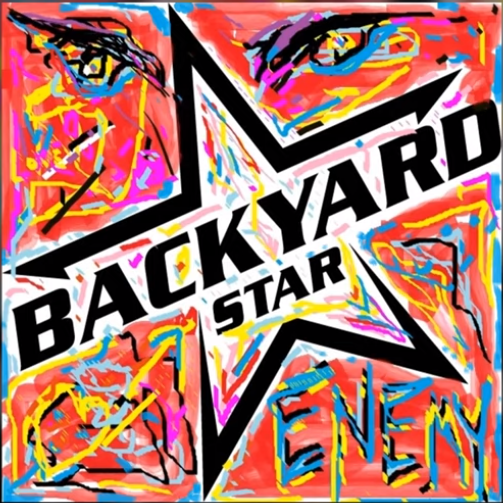 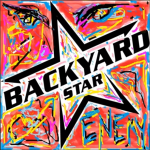 There was a time, eons ago, when I knew with one hundred percent certainty that a particular co-worker would knock on my door every Sunday afternoon. Bill would enter my apartment – invariably shirtless as he was one of those men who simply can’t stand to wear a shirt – and say ‘Heeyyyy, what’s up?’ My spoken answer was always Not much, the unspoken coda being And I‘d like to keep it that way. Bill never had a plan. He was perfectly happy to simply flop down on my couch and become The Thing That Wouldn’t Leave.

Eventually I started going out every Sunday morning and moving my car to the other side of the complex in the vain hope that Bill would think I wasn’t home. It never worked. He would still knock on my door and I would hide in the kitchen leaving his entreaty unanswered. The length of time that the shirtless man stood out there pounding on my door probably alarmed the neighbors.

With ‘Enemy,’ Backyard Star posts a talisman on the door, a veritable skull and crossbones to ward off their own Shirtless Bills, a demographic that includes pretty much the entire world.

The beauty of the complaint is in its overarching inclusivity and non-discrimination. And while a dreaded People Person will no doubt yank the bellrope of Sociopathy, I believe that our singer, like most hermits, suffers primarily from the lack of an effective publicist. As Kierkegaard wrote, ‘People understand me so poorly that they don’t even understand my complaint about them not understanding me.’

‘Enemy’ begins benignly enough, with a pleasantly-strummed acoustic guitar, before launching into full rock anthem mode. The voices in the singer’s head create a chorus of harmonies while a glockenspiel dings distantly throughout the track, possibly played by whatever soul is chained up in the attic.

Backyard Star is Matt Fass of Los Angeles. ‘Enemy’ is the first single from their soon-to-be-released fifteen-song album, Big Dreams. On today’s track Matt provides drums, electric guitar, and all vocals. Fernando Perdomo, whose credits as a musician, songwriter, and producer would fill several pages, plays bass and acoustic guitar. The track was co-produced by Matt and Fernando.

‘Enemy’ marks Backyard Star’s third appearance in Reverb Raccoon. Last July we featured ‘Two Is Better Than One,’ from the three-song EP iPhone Demo, which contains the most beautiful and memorable couplet that I’ve encountered: Can you play the tambourine / On two and four not one and three? I mean, that really is what love is all about, isn’t it? And in December we included ‘It Never Snows in LA’ in our compilation of Best Christmas Songs of 2018.