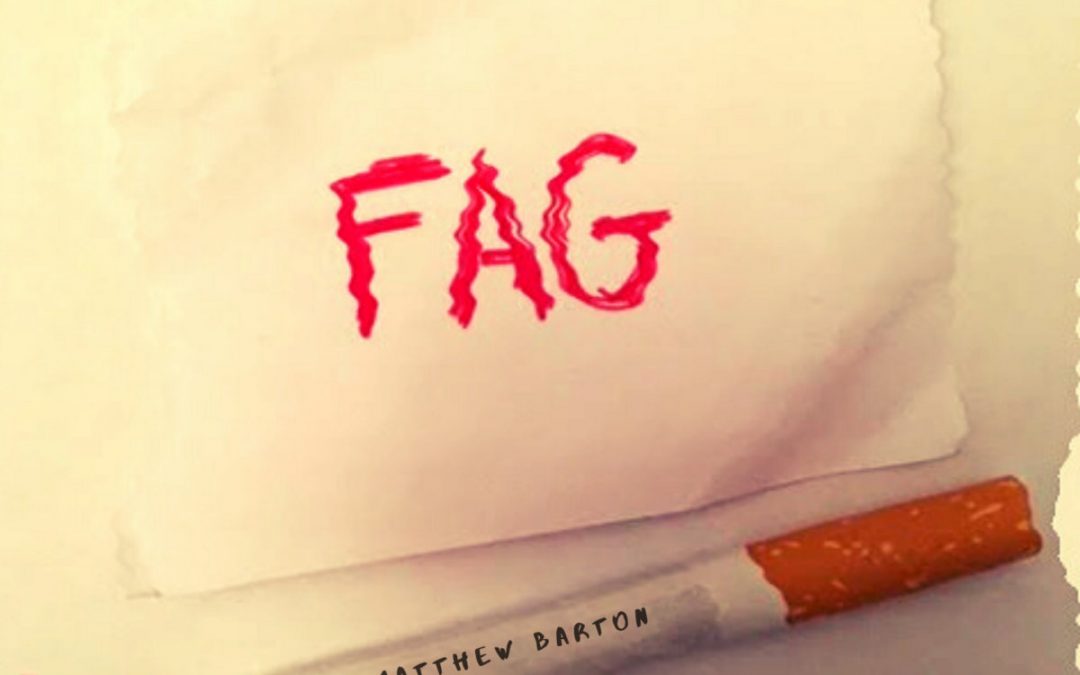 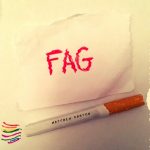 Watch us turn into eagles that fly. Look in my eyes, people realise… You must mobilise… — from “Fag” by Matthew Barton

The first thing I saw in my mind when I wrote “Fag” was an army. Well, a kind of army. I saw a growing band of rainbow warriors, poised to turn hate on its axis and change it for forces of good. A group of free spirits preaching peace and love and acceptance in the face of an unidentified but omnipresent force. A harmonious protest – but with steely resolve. Weapons weren’t a part of it. These people just had words: the words they had heard themselves, a million times over, molded into a ball of fury and defiance and thrown back at whoever had spoken them. A mirror held up. These rainbow warriors were not going to be beaten, or cowed, by anyone’s words.

“Fag” is a song of queer uprising. I wanted to write a song imagining – no, not imagining, realizing – a place where we can summon the strength to come together and challenge prejudice in a constructive way. A fiery but composed assertion that NO, we will not be beaten. A queer utopia.

The image of the fag as cigarette is central to me: putting out the fag is, for me, an act of dismissal, of discarding something undesirable and unnecessary, throwing out the trash. Something unwanted to be stubbed out under your shoe and left to gather dirt in the street. That’s what “fag” symbolises to me. It lacks affection or grace, or empathy. It’s something that, if it had worth, doesn’t anymore. Which is how I came to feel about the word’s homophobic connotations. The meanings began to converge for me.

It’s a symptom of our more progressive society that I felt I could explore these ideas in song; songs like Joe Jackson’s “Real Men” and Tori Amos’ “Taxi Ride” gave me the courage to follow the train of thought. But the prejudice is still there and very real; there are all kinds of implications with the word, and there’s something in the harshness of it that sticks in the throat. Or does it sound harsh because of what we know it to mean?

It’s a word that is used to belittle and decry, to assert authority and power, to carve out your own social niche. I am calling you this because I am more powerful than you. Because I can. Calling you this reinforces my position in the pecking order. It redefines you as “other” and “lesser.” It’s another conversation to have as to why people feel the need to do that. I wanted to explore that power play somewhat, imagining a place where the oppressed morph into birds of prey before the oppressors’ eyes, where they challenge and cry: “Listen to me, listen to me, I’m tired of being unseen.”

Lately, though, I’ve been seeing the tides turn a little; I’ve seen gay men reclaiming “fag” for themselves, I’ve seen it as a hashtag on social media platforms, a new kind of self-style, a marker of identity. It’s a word that is historically offensive and also now a word that frightens and confuses. It got me thinking about the nuances of meaning, the way context changes our perception of a term, how different people can use the same words for different things. How and why can the same word mean different things coming from different people? When is it okay and when is it not? Is it ever okay?

I guess that got me round to thinking of “fag” as the sound of some kind of rallying cry. What happens when you take a word and instead of internalizing it you throw it back out there – but as an assertion and as a public commitment to equality, not as an insult? “You say, ‘put out your fag’ – we’ll just come back.” The tension in these meanings is something I felt compelled to explore.

But there’s a reason why songs are songs and not essays. I didn’t set out to write a three-and-a-half minute song but it happened like that, and I suppose that says something of my desire for simplicity and directness. The guitar part was the hook on which I could hang the rest of the song; clean chords, a simple melody, a refrain – the goal I was striving for, without knowing, was for something direct and anthemic, and it was guided by instinct rather than design.

“Fag” is almost more of a manifesto to me than a song. It just happened. I guess I needed to say it. Is it personal? Yes. But is it universal? I hope so. I was probably thinking of a lot of things around the time of writing it. I saw the National Theatre production of Angels in America some months before, a gay fantasia which inspired me no end with its complex portrayal of queer themes. Wim Wenders’ Wings of Desire, too, was a thread running through; the idea of unseen guardian angels close by. In the first verse of “Fag,” the angels have fled the diseased and the dead… but I like to think that, by the end, they’ve returned.

As with all of my recorded material, it was put down on a four-track. I didn’t want lots of complex parts – this was all about simplicity. Over time I’ve got to love the sound of a rough demo: of the tape hiss, of the microphone clicking in and out, of the rudimentary mastering. It’s just me and my words and the song. A record I have been obsessed with for some time is PJ Harvey’s 4-Track Demos, a record that makes virtue of its pared-down setup and, crucially, its immediacy. With something like “Fag,” I didn’t feel the song needed anything else. There’s some organ in it, and the percussion is a tub of rice. Why not!?

Ultimately, it had to be fun to play and simple enough to sing back. What’s the point of a queer anthem, after all, if you can’t have some fun?

And, yes, I did want it to be something of a queer anthem. Queer people are bloody strong. I wanted to acknowledge that and celebrate it. As much as this song is a rallying cry for the repressed, it’s not a threat. It is, to me, a song of hope and resilience. It’s saying that, in the face of prejudice, we will remain strong. And I think that can be true of anyone who is marginalised or feels marginalised, queer community or not. It’s a song for all of those people.

There are many songs of redemption and power and resilience, and all of them are different, and beautiful, and shaped by each writer’s experience – as different as the colours of the rainbow. They’re all unique yet form part of a collective voice. I hope that “Fag” goes some way to adding to that collective voice a little.

Based in the UK, Matthew Barton describes his music as “where 60s girl groups and DIY cassettes meet, on a fuzzy four-track with guitars and synths and autoharps and harmoniums.” Today’s track is Matthew’s second song of the day; we previously featured “Orchid,” released last month. Matthew Barton’s music is available on Bandcamp, Soundcloud, Spotify, and Apple Music. And be sure to follow Matthew Barton on Instagram and Twitter.