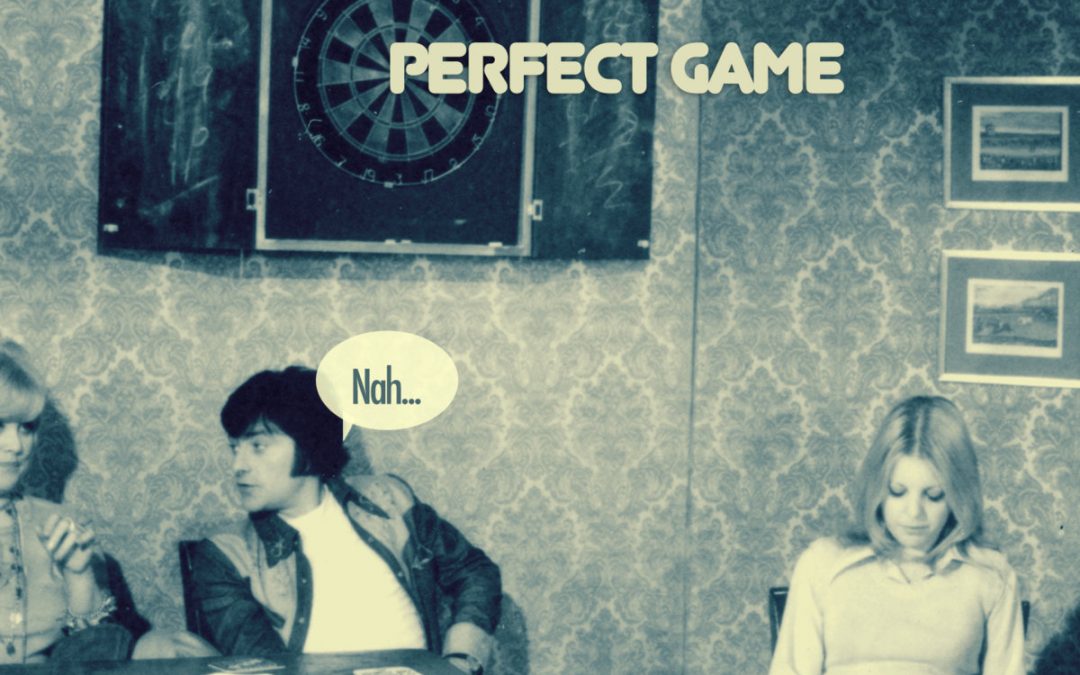 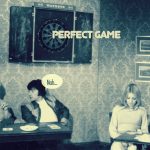 Yet so pleasing the Pain is, so soft is the Dart, That at once it both wounds me, and Tickles my Heart. – Henry Purcell, The Fairy-Queen

There exist almost four thousand nine-dart combinations that create a perfect finish, a score of exactly 501 points. Phil Taylor, the greatest of dartists, accomplished the task twenty-two times, eleven beneath the scrutiny of a television camera.

With eight billion beings roaming our planet, finding the perfect love match should be easier than throwing the nine-dart finish. Someone seeking that one-in-a-million soulmate has eight thousand possible partners. If one simply looses Cupid’s nine-dart quiver on a crowded sidewalk, the odds are high that a point will pierce the heart of that perfect person. And yet, most people and their should-have-been partners play Love’s Game in opposing brackets.

With ‘Perfect Game,’ Nah… enters the smoky barroom and launches darts at targets both on the wall and on the stools, putting the shame to Phil Taylor, whose skills apply only to immobile objects. But, already wounded, the singer will need a steady aim to avoid getting skunked. Every day I smell your hair / My heart is hit from here and there / By cupid’s arrows and your smile / Stay with me another while / Let me fill your secret file / Taylor doesn’t seem to be that versatile…

Shiny guitars shimmer down a stairway, leading the voice into the venue, cheered on by a baby ton of background singers. Every note is precisely placed; there’s not a fogle in the flight. ‘Perfect Game’ is simultaneously retro and fresh, with enough edge to clear the cobwebs after a too-many-pint evening, but sufficient softness to make lifting a morning glass seem like a good idea.

Nah… is Estella Rosa (vocals) of Amsterdam and Sebastian Voss (instruments and vocals) of Münster. Together they create jangly pop music that is unapologetically twee. It is also fun and good. ‘Perfect Game’ is the first single from their soon-to-be-released debut album. Nah… has been releasing records since early 2018 but – amazingly – Estella and Sebastian met in person for the first time only recently.

Today’s track marks our fourth Song of the Day from Nah… We previously featured ‘Apple Blossoms,’ ‘Road Trip,’ and ‘Summer’s Failing.’  We also featured ‘Your Lie Is Not Acceptable,’ from The Fisherman and His Soul, the solo project of Sebastian Voss.

This review also appears in Fadeawayradiate. Check it out to discover the best in ‘nu and old dreampop, shoegaze, lo-fi, bedroompop, janglepop, tweepop and sophistipop.’ 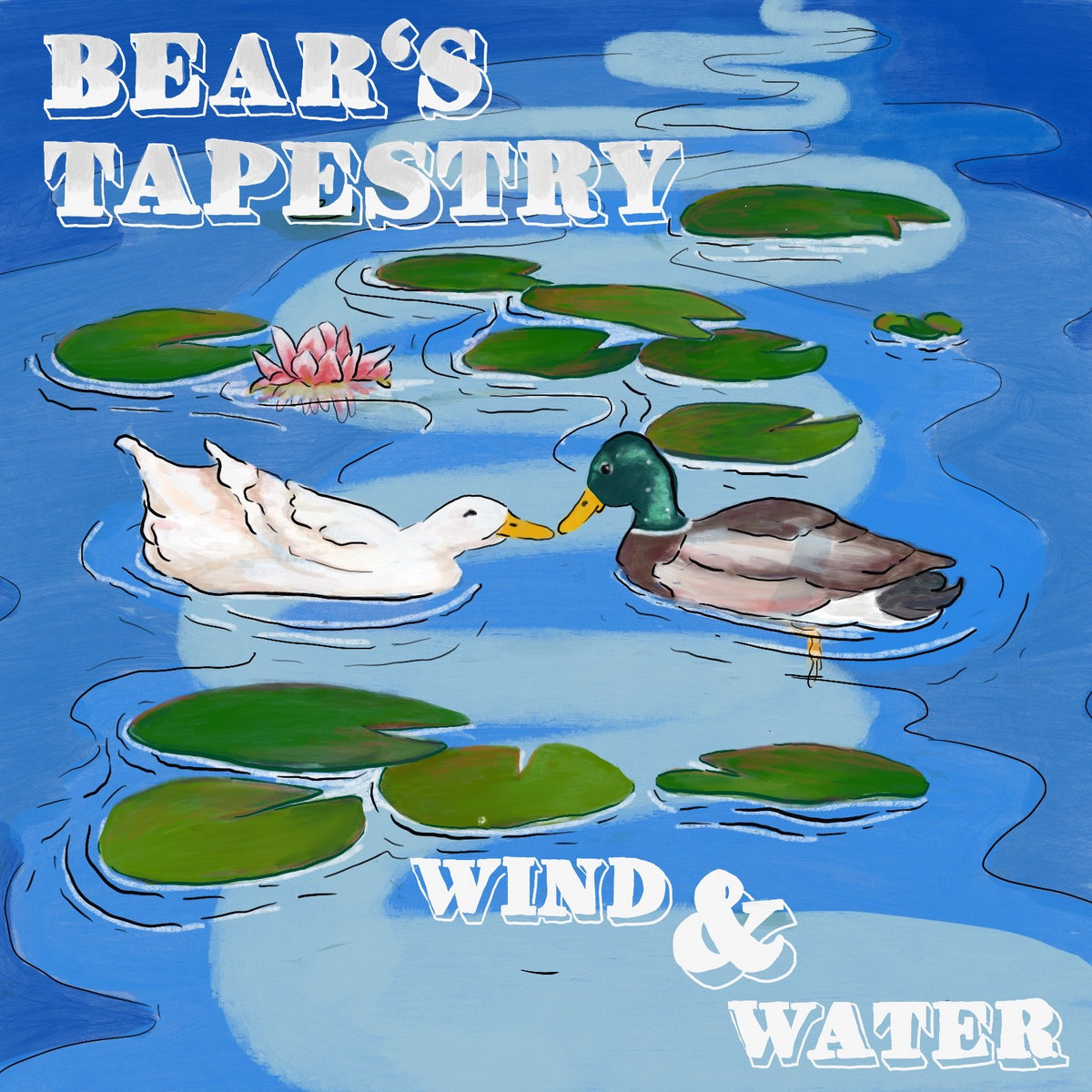 Look at the moon. It travels in the sky completely free, and this freedom produces beauty and happiness. -- Thich Nhat Hanh, quoted on Twitter Actually it’s constrained by the Earth gravity. If it was completely free it would be floating through space and we wouldn’t... 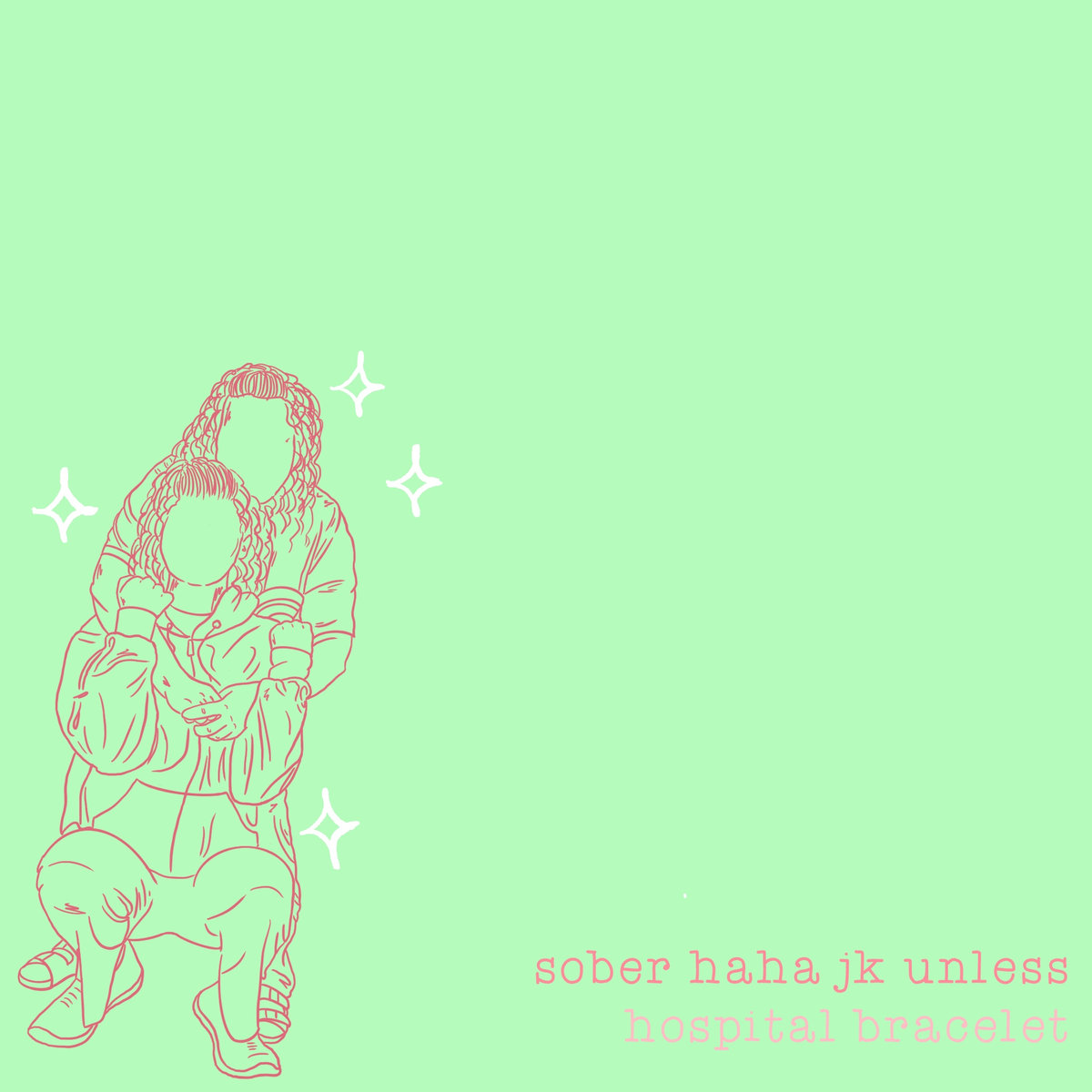 When I was in college and met someone for the first time, the standard question was 'What’s your major?' At the Bradley Center, the initial icebreaker was 'Did you come in a police car or an ambulance?' Some arrived without clothes; substance abusers often rend their... 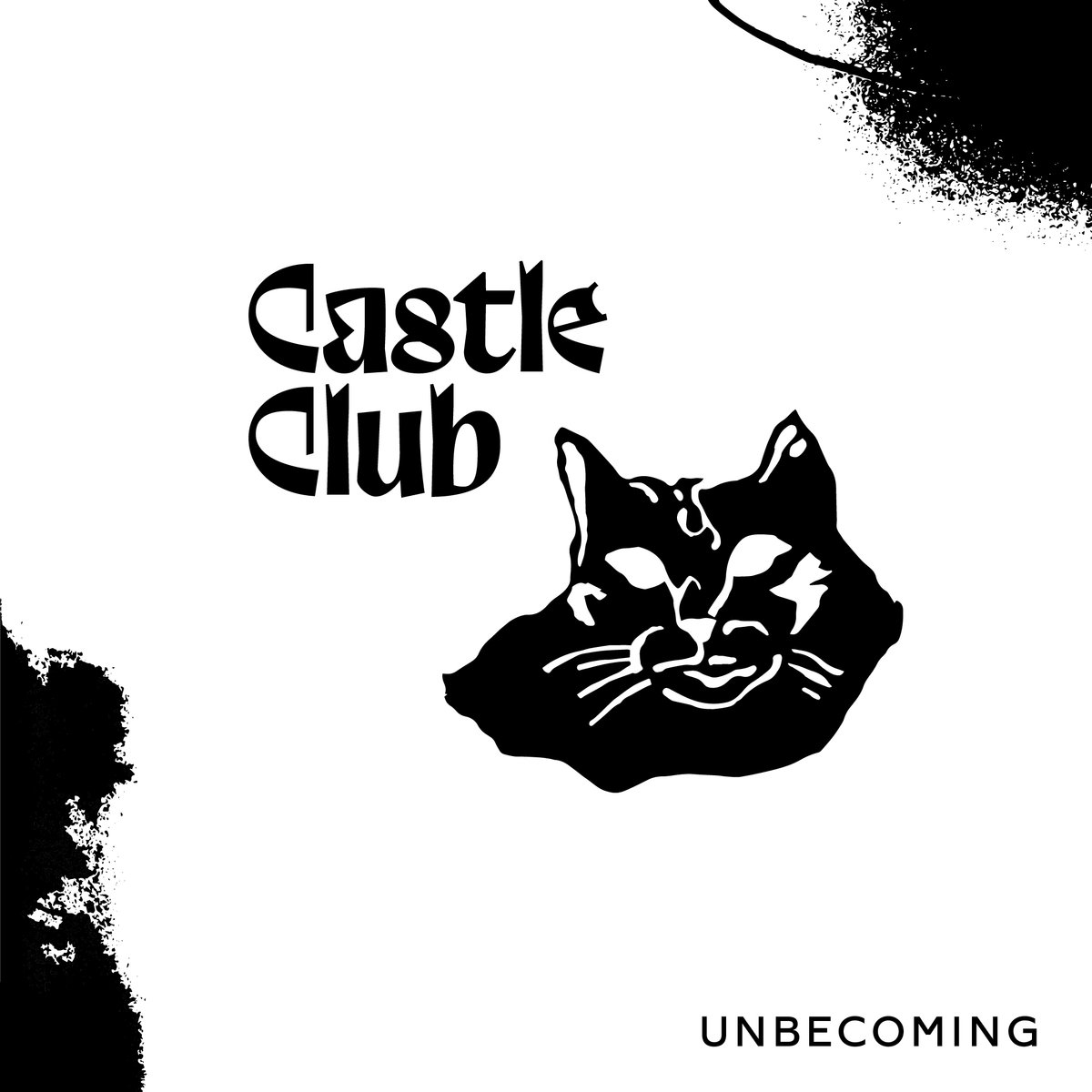 The very concept of home has become tarnished, misty, elusive. As never before, we are living in a rootless age. So many of us are refugees, living out of suitcases, car trunks, cardboard boxes, desperate to go back to a home that no longer exists. -- Chris Atack, The... 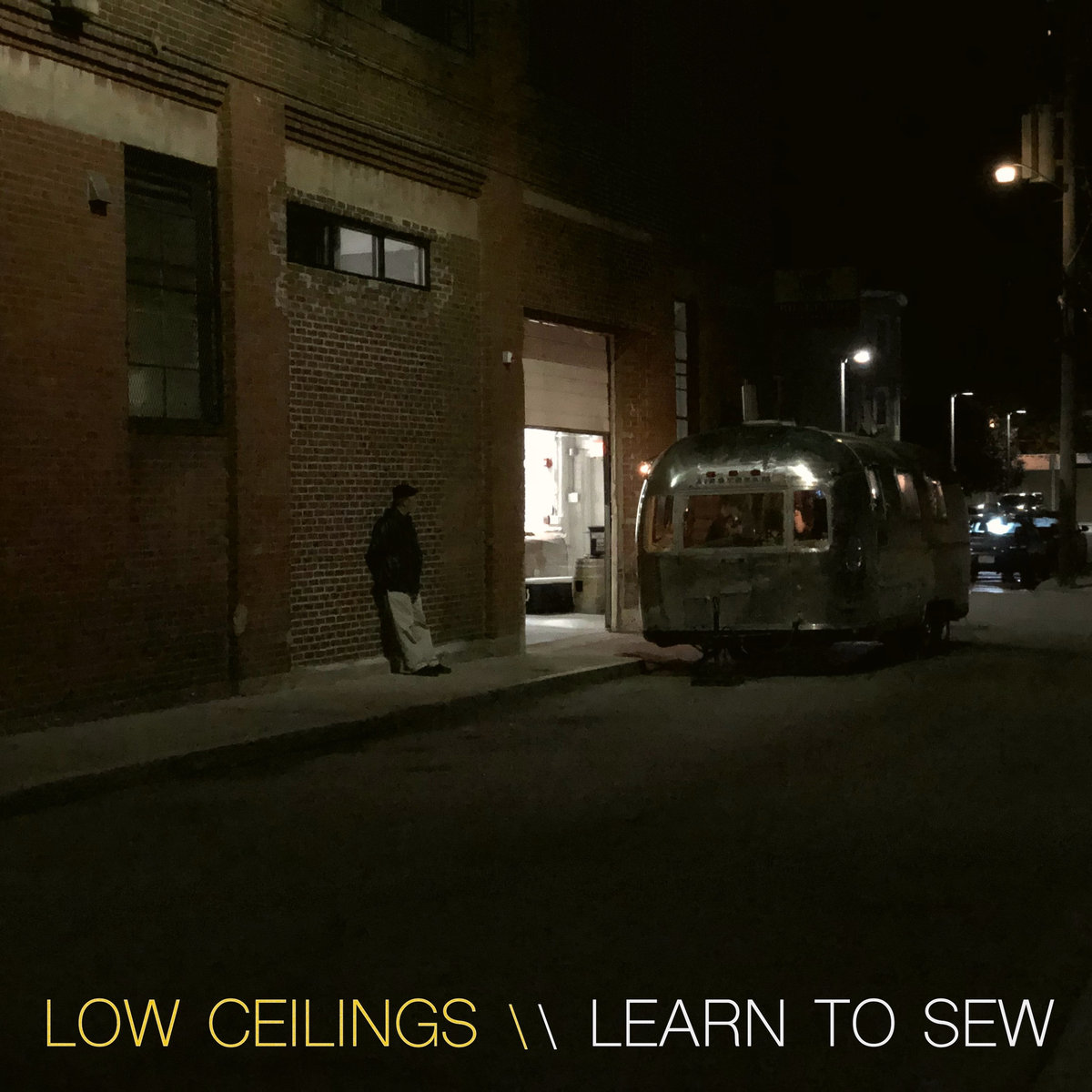 Death induces the sensual person to say: Let us eat and drink, because tomorrow we shall die... -- Søren Kierkegaard, Three Discourses on Imagined Occasions What shall I do tomorrow? Because, you know, at some point I'm going to be dead. -- John Dredge, Twitter I...