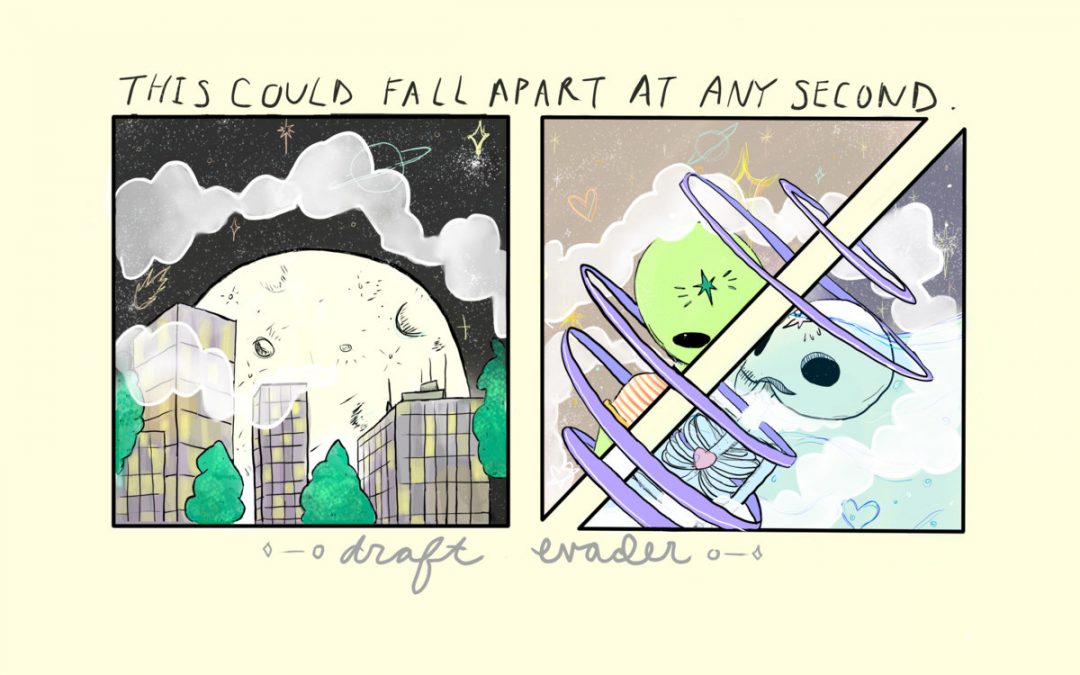 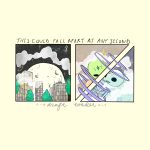 The concept of time is simply an illusion made up of human memories. Everything that has ever been and ever will be is happening right now. — Sean Martin, reporting on the theories of Max Tegmark

All moments, past, present and future, always have existed, always will exist. — Kurt Vonnegut, Slaughterhouse-Five

If the light waves on which our lives are imprinted have always existed and always will exist, then somewhere out there I am in my middle school band, perpetually playing the alto saxophone, an uninvited grace note slipping a sliver of sound between the index-fingered B and the middle-fingered C for all eternity. But in those same light waves I have always had, and always will have, a crush on that cute blonde girl who sits in the row behind me playing a silver cornet.

In ‘Small World,’ Draft Evader shows us a pillowcase permanently marked with mascara, stained perhaps before the sheet set purchased at Target was removed from its plastic packaging. And as the bed expands from a young person’s Twin to the spacious playing field of the King, the pillowcase has been, and always will be, painted by the brush strokes of the same pair of eyelashes.

although we’re living different days
mascara stains your pillowcase the same
i’m looking back and without a doubt
love who you were, who you are now, today

‘Small World’ is a straight-up rocker, the energy of the Ramones briefly enhanced by the lead guitar that was – and is – avoided by Johnny. At two-minutes-thirty, there’s no time for frills or even a fade, just a wall of sound into which you can smack your face. Listen for the proto-Ringo ba-bop… bop that surfaces at the end of each verse line. And is that a keyboard buried in the mix, or the harmonics created by the crashing guitars?

Based in Chicago, Draft Evader is the solo project of singer/songwriter/guitarist Ryan Loree, assisted by Joe Scaletta of Word of Mouth Recordings on bass and drum programming. ‘Small World’ appears on Draft Evader’s new three-song EP, This Could Fall Apart at Any Second. His previous EP, the two-track Cashed, described the existential double-crisis of suffering a car accident and the loss of a job in quick succession. In an Eclectic Music Lover feature, Ryan described his music as pessimistic punk rock. But, being a sucker for a good love song, I found ‘Small World’ to be refreshingly uplifting.

‘I was just sitting around one day plucking my guitar and saw a mascara stain on my girlfriend’s pillowcase and ‘Small World’ was the end result,’ Ryan told us. ‘The main theme of the song is that although a lot has changed, not much has changed. We’re living completely different lives than we were ten years ago, but essentially everything is exactly the same. I’d be lying if I said this song wasn’t heavily inspired by The Ramones and how they approached love songs. This song was all about getting back to basics, so I wanted to keep it as simple and straight-forward as possible.’

This Could Fall Apart at Any Second and Cashed are available on Bandcamp. And be sure to follow Draft Evader on Twitter.