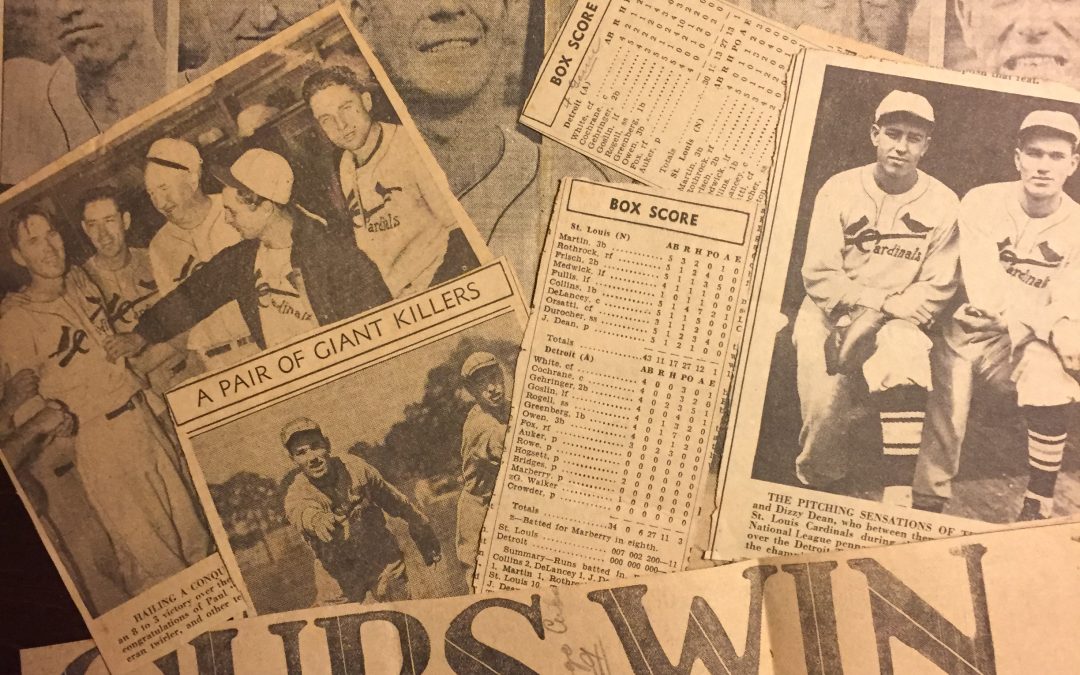 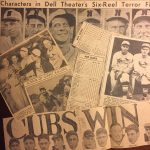 I never knew my father’s father. He was a lineman for the county, and got himself fried long before I arrived. No one wanted to talk about him. I know him best through a paper bag full of newspaper clippings that he cut from the Nashville Tennessean.

He was a baseball fan. The bag held many clippings about major league teams and players – mostly those in the National League – and many more about the Nashville Vols, a minor league team that played in a bizarre ballpark called Sulphur Dell. And among the pile were the box scores from the 1934 World Series between the St. Louis Cardinals and the Detroit Tigers.

The box scores clipped from the newspaper are the standard lists of names and numbers. But within the lines we find traces of larger legends, events of which I read long before I unearthed the faded rectangles of newsprint.

The Tigers were a great team, but our collective consciousness has smiled on the Cardinals, remembered as the Gashouse Gang. The 1934 team featured six future Hall of Famers and a host of Hall of Fame-worthy nicknames.

The position players included player-manager Frankie ‘The Fordham Flash’ Frisch, Joe ‘Ducky’ Medwick, Ripper Collins, Spud Davis, and my favorite, third baseman Pepper Martin, also known as ‘The Wild Horse of the Osage.’ Shortstop Leo Durocher was later labeled ‘The Lip,’ but in 1934 he was called ‘The All-American Out.’

On the mound the Cardinals had Wild Bill Hallahan, Dazzy Vance, Jerome ‘Dizzy’ Dean, and his brother, Paul ‘Daffy’ Dean. We can argue all night about the merits of today’s ballplayers vs. the players of the past. But there’s no doubt which group had the better nicknames.

Before the 1934 season opened, Dizzy bragged that he and Paul would win forty-five games. They topped it: Dizzy won thirty games and Paul won nineteen, including a no-hitter. In the World Series, the Dean brothers won two games apiece. Dizzy Dean took the win for the Cardinals in Game One. The second game featured Wild Bill Hallahan against Detroit’s Schoolboy Rowe (the Tigers had some good names, too), with the Tigers winning in twelve innings. Paul Dean won Game Three.

Game Four
Examining the box score, we see a pair of curious notations: zDavis showing one at bat and one hit, followed by zzJ. Dean with no at bats or hits. Below the totals we find zBatted for Vance in fourth and zzRan for Davis in fourth. These lines represent the cold facts behind one of the most unusual, potentially tragic, but ultimately humorous incidents in World Series history… 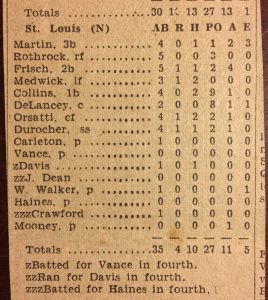 The day did not go well for the Cardinals; they lost 10-4. In the bottom of the fourth inning the Cards were trailing 2-4. With no outs, Durocher on first, and center fielder Ernie Orsatti on second, manager Frisch sent catcher Spud Davis up to pinch hit for Dazzy Vance. Davis singled to right, driving in Orsatti and moving Durocher to third.

Like most catchers, Spud Davis was not known for speed. And with the top of the order coming up it was expected that Frisch would send in a pinch runner. What was not expected was that Dizzy Dean would emerge from the dugout. It’s not clear whose idea it was for the best pitcher in the majors to hit the base path, but Dean was a reasonable choice. He was fast and, being scheduled to pitch the next day, would not otherwise be expected to play.

The lead off hitter, Pepper Martin, stepped in and grounded to Detroit second baseman Charlie Gehringer, who flipped the ball to shortstop Bill Rogel covering second. Rogel tagged the base to force Dean, fired the ball to first to complete the double play… and drilled Dizzy right in the head.

Legend has it that the ball caromed off Dean’s skull into center field – quite a feat considering they didn’t wear plastic batting helmets back in the day – and that Dizzy was dropped in his tracks, dead to the world. But a photograph shows that Dean stumbled several steps beyond second before collapsing, and that he was conscious enough to grasp his head in pain. Dean himself described the beaning as ‘a glancing blow.’ 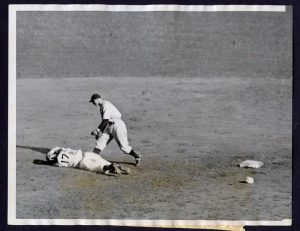 Having seen his star pitcher – the starter of the next game – take a ball to the head and flop down in the dirt, manager Frankie Frisch must have felt his personal ball of twine was rapidly unraveling. The thirty-seven thousand Detroit fans filling Sportsman’s Park, however, were probably delighted.

Dizzy Dean was hauled off to the hospital where the doctors pronounced him more or less okay. And Dizzy himself provided the punch line to the entire incident. When he exited the hospital, Dizzy told reporters, ‘They X-rayed my head and found nothing.’

Game Seven
Dizzy lost in Game Five, giving up three runs over eight innings and feeling no ill effects from the previous day’s antics. But Paul outpitched Schoolboy Rowe in Game Six to set up the final game, played in Detroit, with Dizzy Dean pitching for St. Louis on one day’s rest. The game was never in doubt; Dean shut out the Tigers and St. Louis won 11-0. 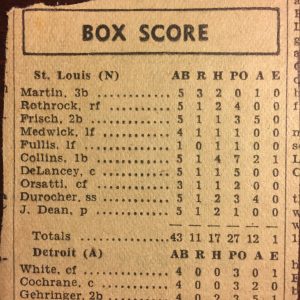 But the box score has an oddity: Medwick, lf with four at bats and one hit, followed by Fullis, lf with one at bat. From this we gather that, late in the game, left fielder Joe Medwick was replaced by Chick Fullis. The bare facts recorded by the box score conceal an incident that has been told and retold and is about to be retold again…

In the top of the sixth, with the Cardinals leading 7-0, Medwick tripled and slid (or ‘slud’ as Dizzy Dean would say) hard into third base. He may have kicked Detroit third baseman Marvin Owen. Or Owen may have kicked Medwick. There was so much dust in the air, no one could tell from a distance.

At any rate, the Detroit fans didn’t take kindly to whatever Medwick had done. Even in an era when it was common for a sliding runner to slash a fielder’s legs with his spikes, playing so aggressively when you were up 7-0 was borderline unsportsmanlike. When the inning ended and Medwick took his place in left field, the fans in the bleachers behind him began to pelt him with fruits and vegetables.

Medwick retreated. Detroit’s manager, the umpires, and the PA announcer asked the fans to withhold their produce. Medwick tried three times to take his position, but each attempt brought on a rain of fruits and vegetables. Finally the Commissioner of Baseball, the fantastically-named Judge Kenesaw Mountain Landis, intervened. After conferring with Medwick, Owen, and Frisch, Landis ejected Medwick from the game. He was replaced in left field by Fullis. 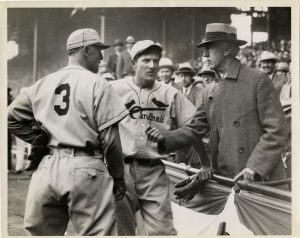 ‘I decided to promptly remove him from the game,’ Landis explained later. ‘Particularly as I felt that an even more dangerous outbreak might develop if Medwick continued to play.’ Joe Medwick thus became the only player ejected from a World Series game by the Commissioner himself, a move made for the player’s own protection.

After the game, Medwick put the tag on the Tigers fans. When asked about the fruits and vegetables that were sent his way, Medwick said, ‘I knew why they threw them. What I don’t understand is why they brought them to the ballpark in the first place.’

Postscript: Many years later, while on a USO tour, Medwick and several other players were granted an audience with Pope Pius XII. When asked what he did for a living, Medwick – then with the New York Giants – replied, ‘Your Holiness, I’m Joe Medwick. I, too, used to be a Cardinal.’