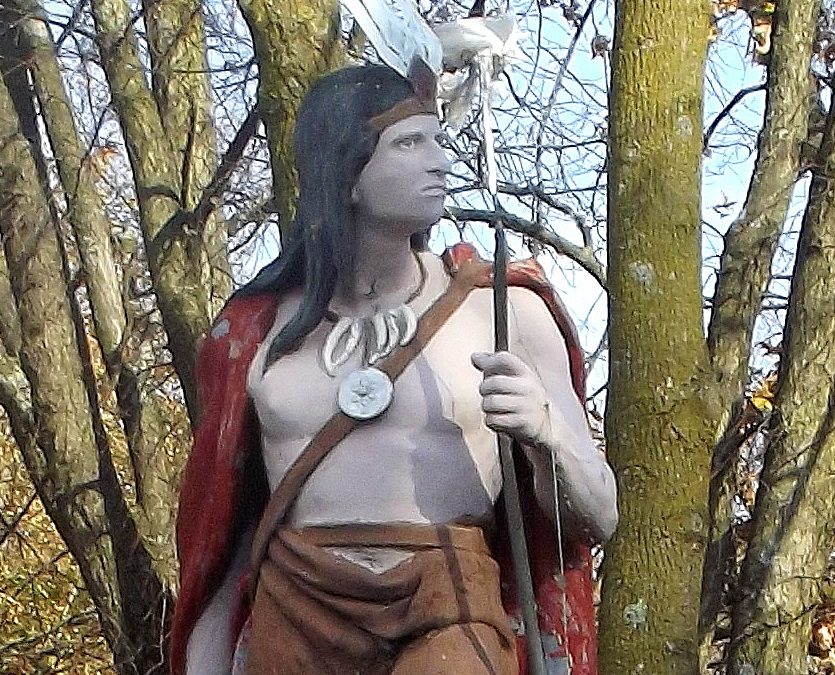 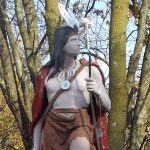 Christopher James, a resident of Mount Kisco, New York, is a superhero. I’m not sure what powers he possesses, but I believe they include Songwriting, Playing the Ukulele, and The Ability to Stand in One Place. Someday, a musical entitled Mount Kisco Moon will be produced based on his exploits….

Our story opens with the ghostly stage illuminated by a full moon shining on Mount Kisco’s landmark statue of Chief Kisco. The statue turns to the audience (it isn’t a statue!) and says, ‘Oh, hello there.’ We had hoped to cast Morgan Freeman as the Our Townian narrator but couldn’t afford him, Mount Kisco Moon being a rather low-budget affair. We now present musician Rob Thomas in his first dramatic role.

As far as being a superhero goes, Christopher James is an entirely local phenomenon. His powers are derived from the moon over Mount Kisco, and if he ever leaves town he will permanently lose his abilities. The story’s conflict arises as our hero considers leaving Mount Kisco – and losing his superpowers – to pursue his Passion. As of this writing, his Passion is undetermined. Perhaps it will remain an enigma, the Rosebud of Mount Kisco Moon.

Chris claims he’s ‘just not that into the whole superhero thing.’ He doesn’t even bother to maintain a secret identity. It’s difficult to make a living in Mount Kisco, and his job as an illustrator at the local newspaper barely covers his student loan payments. He tried charging people for his superservices – primarily plucking cats out of trees and saving people who fall into sinkholes – but gave that up after his best friend told him it was ‘a real dick move’ and the local paper, the same one at which he works, published an editorial in which Chris was dubbed The Man of Steal. His editor ordered Chris to illustrate the piece with a drawing of himself sleeping on a park bench while an elementary school burns the background.

Our hero’s love interest is the unironically-named Lois Lane. Their love must remain a supersecret, as her wealthy parents said they would disown her if she didn’t stop dating ‘that long-haired freak who draws the weird pictures.’

The phone booth reference is a metaphor for the feeling of entrapment that Chris experiences as he paces the town, circling the statue below the moon o’er Mount Kisco.

The curtain falls as our hero (spoiler alert!) departs Mount Kisco to pursue his Passion. As he steps onto the bus bound for Brooklyn, lugging an ancient suitcase held together with rope and covered with the stickers of long-forgotten punk rock bands, we hear a voice from offstage cry, ‘Chris! Wait for me!’ Cue the finale…