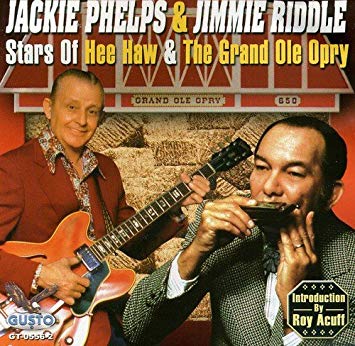 If you cranked up a television on a Saturday night in the early 70’s and flipped through the channels, you inevitably encountered a show called Hee Haw. And if you lingered there long enough, you beheld a strange and wondrous sight: two men, often standing in a barn or cornfield, one rhythmically slapping his thigh and chest, the other having an asthma attack. If you were born into a more culturally uplifted era, this is what you missed…

The thigh-slapping act is called Hamboning, The asthma attack is called Eephing. Or eeephing, eefing, or eefin’. The practice originated in Tennessee over 100 years ago, where the inventor must have suffered from a serious medical condition. The genius who translated his disability into a sort of music was probably unable – due to illiteracy or the unsteadiness of hand that followed his spasmodic wheezing – to write down the name of his creation, thus rendering the correct spelling a source of debate. Jennifer Sharpe, in a surprisingly sympathetic NPR portrait of the aberration, dubbed it Eephing so I’m going with that.

Hee Haw, created by Canadians but taped in Nashville, ran on CBS from 1969 to 1971 and in syndication for an additional 21 years. Each episode alternated country music with documentary footage shot on location in the rural counties of Middle Tennessee.

Hee Haw’s musical acts could be quite good: Buck Owens and the Buckaroos before the death of the great Don Rich; Grandpa Jones and Stringbean Akeman, last of the great frailing style banjoists (and for you high school history teachers who are frantically scrolling down to the comments to tell me that either Grandpa, String, or both were actually clawhammer stylists and not frailers, all I can say is: Get A Life.); guest appearances by legends such as Roy Acuff, Johnny Cash, George Jones, Conway Twitty, and Loretta Lynn; the Hee Haw Gospel Quartet; Roy Clark, a fantastic multi-instrumentalist when not acting the clown; and the Million Dollar Band featuring Clark, Chet Atkins, Floyd Kramer, Boots Randolph, Danny Davis, Jethro Burns, and Johnny Gimble.

The documentary segments provided viewers with a stunningly accurate depiction of life in Middle Tennessee circa 1970. In the video below, we see a junior high school band concert. You will notice that the students are exclusively female, all school-age males in the region having been killed off in the Civil War which ended in 1965. The band members are older than the pupils of a typical Northern junior high, since they are able to attend classes only one or two months a year, with most of their lives devoted to shucking corn, scrubbing clothes with lye soap, butchering hogs, pulling suckers off the tobacco crop, making moonshine, and running from their fathers.

Our next video highlights the entrepreneurial travails of a car dealership owner who is attempting to introduce modern transportation into a culture still dominated by mule-drawn conveyances.

Although 5-digit telephone numbers remained the standard in Middle Tennessee until 2005, they were rarely used since virtually no phones had rotary dials. Calls were initiated by lifting the earpiece, hammering the switchhook several times, and yelling “Sarah? Gimme Mount Pilot!”

Ironically, the subjects of the filming rarely saw the finished product, as very few Tennesseans outside the major cities had televisions or even electricity. Older women typically spent Saturday nights, when Hee Haw aired, darning the flour sacks that would be worn to church the following morning, while the men spent Saturday evenings chasing their female children around the outhouse.

In the early 70’s, eephing and hamboning were common methods for musical expression in Middle Tennessee. Few aspiring musicians could afford real instruments, and even fewer could sing since most citizens were toothless. Eephing, however, offered a means of vocalization that did not require enunciation, accurate pitch, or any semblance of embouchure. The Hee Haw documentaries brought eephing to the attention of the general public and made stars of Jackie Phelps, the hamboner, and Jimmie Riddle, the eephist.

Riddle was a master of his craft, using eephing to breathe new life into old standards. Observe the subtle nuances with which he enhances the Carter Family’s “Wildwood Flower.” Renaming the song “Wildwood Eeeph,” Riddle transforms a staid lover’s lament into a kaleidoscope of conflicting emotions.

Sadly, Jimmie Riddle passed away in 1982 at the age of 64. Rumors that his final gasps were an eeph are possibly true.

Bonus Video 1: Jimmie Riddle and Jackie Phelps were, when not eephing and hamboning, talented and respected musicians. Here we see them performing “Sittin’ on Top of the World.”

Bonus Video 2: Jackie Phelps was famous for his two-fingered picking style using only the thumb and forefinger. Here is an excellent demonstration of the technique. Phelps died in 1990. Like Jimmie Riddle, he was 64 years old.

Historical note: Reverb Raccoon was born and raised in Middle Tennessee. His family has lived there since the early 1800’s, being among the first settlers of Giles County. And, no, he does not want to be buried in the family cemetery.