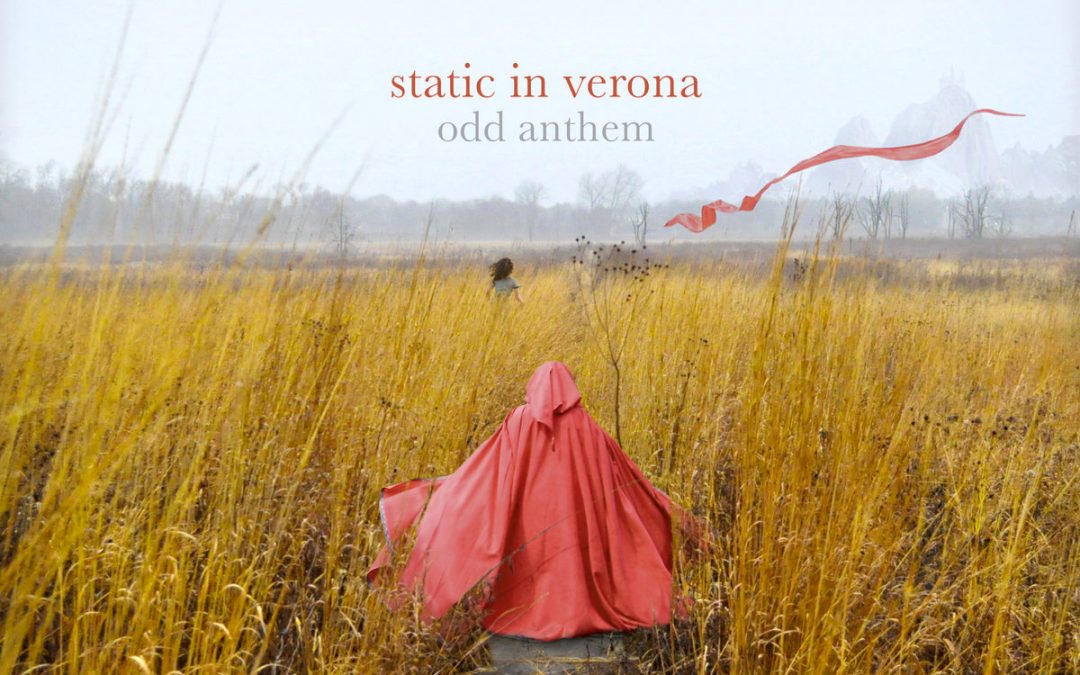 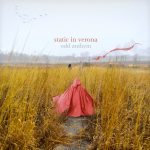 What is your Go-To Music, the sounds you crank up when it’s Headphone Time in the Cubicle, when the traffic grinds to a halt for no apparent reason, when the biography of Harry Truman that you are determined to finish needs a soundtrack, when you check Google Analytics and find that one whole person read your last review? What? The Rolling Stones’ “Satisfaction?” Well, yeah, that’s a great song, but after infinity listens it just doesn’t do it for me anymore. The Replacements? Weezer’s Green Album? How’s that worked out for you? Still in the cubicle reading Harry Truman, aren’t you? Why don’t we try something different this time. Let’s dial up Odd Anthem, the new album from Static in Verona.

Odd Anthem is a fresh, powerful blast of positive energy, a shot of pop adrenaline. Odd Anthem sounds good, and you will feel good listening to it. The arrangements combine synthesized elements with traditional instrumentation and vocals. You may hear Shades of Music Past, but the result is never derivative.

In “Future Ghosts,” the undead spirit of Phil Spector builds a Wall of Sound behind an ocean of Beach Boys harmonies to create a new vehicle, a Flying Tesla rather than a T-Bird, with giant speakers pumping out the Ronette’s “I Wonder.”

The lyrical themes are universal: wistfulness, love, and longing. “Forgetful” describes the ancient problem of trying to forget someone who forgot you ten minutes after you broke up.

Static in Verona is Chicago musician Rob Merz. While some indie musicians struggle to release four or five tracks each year, Merz creates full-blown LP’s. Odd Anthem comprises ten songs. His previous album, Everything You Knew Before You Knew Everything, contained sixteen. And he accomplishes this feat unassisted: Merz writes the songs, provides all instruments and voices, and produces, records, and mixes the product. Most of the work takes place in his basement.

Reverb Raccoon’s readers were introduced to Rob last March in More Songs From The Food Guy’s Twitter Followers, an overview – written by my cat, Milkshake – of artists who accidentally clicked the Follow button beside my name. Milkshake’s take on Rob’s talent: “I can’t believe anyone this good would follow The Food Guy.”

Fortunately for us, Rob loves to talk about music, and was patient enough to answer – at length – several questions about the creation of Odd Anthem…

On your website, you say that you start with a loose idea, then experiment with structure and instrumentation in the studio. Can you describe the process of creating and recording a typical song?

Making my last album, Everything You Knew Before You Knew Everything, I’d sit down with guitar and write a song in the traditional sense. Usually not the lyrics, but the melody with verses, choruses and any other bridges and breaks. Then I’d really think and picture the complete song in my head, so when I was in the studio, I’d do my best to create what I envisioned. I’m not saying I always stuck to that idea, but it was definitely a sturdy foundation from on which to build.

For Odd Anthem, I tried a much looser approach. Sometimes, such as the song “Heavy Hands,” I had just one note on a synth and built the song around that, really having no idea on where it was going to lead me. Or I’d start with just a verse and build that 20 second part of the song up to see if the tone or sound of the song drove where it went to next.

Sometimes I’d complete a song and basically start over again. Like in the case of “Future Ghosts,” I decided I wanted to record the guitars more like a string quartet with each guitar only playing one note, and having 3 or 4 tracks play a complete chord. But as I finished the first pass of the song, it sounded more like the Strokes and less like Static in Verona. So I deleted everything but the guitar quartet and tried to see what other direction I could take it. The result had a Beach Boys On Speed feel to it.

“Forgetful” is actually a song that was on a 4-song EP I put out in 2010, available exclusively on staticinverona.com, called Life-Sized Replica. “Forgetful” was the lead-off track and I always really liked it, but it prominently featured a drum sample from an Afghan Whigs song so I never did a lot with it. When I was finishing up Odd Anthem, I felt I needed something near the end that was more rocking and catchy and that song popped into my head.

The guitars are all from the original version, but everything else is a new recording. I believe you can still track down Life-Sized Replica for free online somewhere and actually the other 3 songs from it are going to be the bonus tracks on a Japanese import of Odd Anthem that Japanese label ThisTime Records is releasing.

This may be a dumb question, but how do you know when a song is finished?

There is an old saying that a song is never really finished, you just learn to live with its mistakes. Since I do everything myself, including the recording, mixing and mastering, I don’t have that outside voice giving feedback. So it’s just me, listening to these songs hundreds of times on several different systems, in different cars, on cheap and expensive headphones, just trying get a sense of what the listener is going to hear. I will go back and create another mix to get the vocals up .5 db, which nobody would ever notice. But it makes me feel better that it’s a touch louder. You just listen to it enough where you grow to like it. But I still hear things on most of my songs that I’d fix.

What is your favorite track on Odd Anthem?

It’s funny, my favorite songs on my albums tend to be most challenging to listen to and in turn, probably the least popular. On my last album I feel like the song “Look Like Gold” was one of the most calculated songs I ever recorded. The song is a about a guy who is basically going insane after seeing a former lover [Editor’s note: This never happens in real life.] and I set it up like a classical piece where the music was reacting to the lyrics. On this album, the same can be said for “Wait, Wait.” It was a song that I only had an incredibly simple three chord riff and hummed a bass line in an iPhone. And the final product is a huge piece, with a long synth intro, a classical outro and cacophony of drums throughout. I just like the way everything intertwines and comes together.

Your previous album took three years to complete. How long did this one take?

Odd Anthem took about half as long to complete, so about a year and a half. It actually started as an EP. I was gonna finish a couple of the songs that didn’t make it to my last album and maybe a few new ones and be done. But as I experimented with this new songwriting process I found more and more music to record. And so somewhere along the way I decided to wait and make it a full-length.

Since you play all of the instruments, and handle all of the production and recording, is the creation of your music a very reclusive process?

I know my family would definitely say I am reclusive when I am in music mode. That’s just kind of the way I prefer it. Even when I was in bands with other people, I would write the songs by myself and bring them to the band. I made a studio in my basement, so it can be pretty isolating down there.

Your songs get a lot of energy from the drums. How much of the drumming is “real” vs. synthesized?

Actually all the drums are synthesized in some way or another. I use a series of loops and sampled drums I play via midi but no live drumming is on the album. I do try my best to play the midi drums as an actual drummer would. With little flourishes, different fills, etc. And I mix them as close to actual drums as I can. But when I use a loop, I try and make them sound more mechanical, so there is a clear separation between the two.

How well does your dense, layered sound translate to live performance?

I have been on an indefinite hiatus from playing live for about 5 years, so only a few songs from the entire Static in Verona catalog have ever been performed live. Being in my thirties, I have been playing in clubs for over 15 years and my heart just wasn’t into the practice and promotion it takes to keep it going. I have always been more of a studio musician anyway, so now I can record without having to worry about how they will be reproduced on stage.

And finally the obligatory Guitar Player magazine question: What equipment do you use?

I use Propellerhead Reason for everything (recording, midi sequencing, mixing, mastering). I know Pro Tools is basically the industry standard and a lot of people use Reason for the MIDI, but I think it’s great for the recording side too. I even use the Line 6 amp modeling in it which is something I swore I’d never do six years ago. But I have two small children at home and recording with amps now a-days is next to impossible, especially since I am a night owl. Since discovering the software, recording has become exponentially easier. And I bet I only know about 30% of the tricks it can do. I also play Fender guitars. I have a Thinline Telecaster and a Toronado (which is an underrated Fender rock guitar).

My new album Odd Anthem is available most places you can stream or download music, most notably on Bandcamp for name-your-price. Let me know what you think. I love to hear from listeners, even if you hated it!

Thanks, Rob. Those were great answers. With any luck, more than one person will read them!

Static in Verona’s albums are available on Bandcamp. It’s name-your-price, but let’s support independent artists, especially the talented ones, by coughing up a few bucks. Be sure to visit the Static in Verona website, and join Rob on Facebook and Twitter.

Bonus Track: “Blindfold,” classic pop from Everything You Knew Before You Knew Everything. Enjoy!